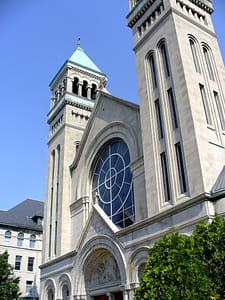 As a city Chicago was only 38 years old and the great fire was merely four years in the past when a Vincentian priest came to establish the new parish of St. Vincent de Paul. As he walked toward what was then vaguely recognizable as Webster and Osgood (now Kenmore), he could see little save for truck farms, dirt streets that became rivers of black mud in the spring rain and the winter snow, and an occasional home to break the monotony of the sweeping prairies.

With $5,000 in his pocket to purchase property and to begin a new parish that was on the very fringe of the city, which was in many respects largely uncivilized, the 41-year-old Rev. Edward Smith, C.M., could think of few reasons for joy. He had no home and no church, save in his imagination. For almost an entire year, his church would be the small chapel of the Daughters of Charity a quarter of a mile away in St. Joseph’s Hospital. But he had good will, boundless enthusiasm, endless zeal, the luck of the Irish, and most important of all, 75 parishioners who knew as well as he the meaning of poverty. 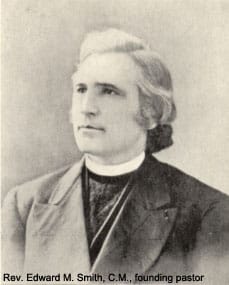 Laboring together, Rev. Smith and his dedicated parishioners commissioned the construction of a small brick combination building on the corner of Webster and Osgood. On Christmas Day of 1875, Rev. Smith and his first parishioners were able to celebrate the first Mass in the as yet uncompleted building. There was no roof over their heads to cover them from winter’s storms and only a temporary floor beneath their freezing feet to stem the bitterness of the cold. The building had little to recommend it either artistically or architecturally. When it was dedicated on April 30, 1876, one of the local papers asked sneeringly, “What is it?” A good question, Rev. Smith himself would undoubtedly have said.

The building was everything. It was the parish church, the pastor’s home, the parochial school, and the parish hall. And it was to remain everything except parochial school until Rev. Smith’s second stint as pastor. For early in 1891, Rev. Felix Guedry, the third successor of Rev. Smith, established the first St. Vincent’s School.

After Rev. Smith returned from New Orleans in 1891, where he had served as a chaplain and pastor, he saw a city that had mushroomed almost miraculously overnight. His little church and combination parochial residence was woefully inadequate. Expansion was impossible; a new church was an absolute necessity. Perhaps the taunting words of 1876 induced him to plan the splendid structure that would be the best that human ingenuity and artistry could devise.

The result was the magnificent (even by today’s standards) church that graces the corner of Webster and Sheffield. When it was dedicated on May 1, 1897, there were few churches that could rival it in grace or architecture. Unfortunately, Rev. Smith never lived to officiate in the church that he had planned with loving care. He died before the church could be dedicated, and his was the first funeral to be held in the beautiful sanctuary to which he had given his life.

Some two years later, there came to St. Vincent’s as pastor Rev. Peter V. Byrne, president of the newly established St. Vincent’s College and superior of the Vincentian Fathers in Chicago. Rev. Byrne deeply respected the designs and ideals of the first pastor. Rev. Byrne selected the exquisite Stations of the Cross that line the walls of the church. He installed the wonderful Lyon & Healy organ, whose beautiful music we still hear today. He erected the Lyceum and the Auditorium, which during the early 1900s were perhaps the first parochial community center in the city of Chicago and which were cultural, intellectual, and social outlets for the entire North Side community.

When Rev. Byrne retired because of ill health in 1909, Rev. Francis Xavier McCabe succeeded him. Rev. McCabe was an able administrator and prominent orator who drew crowds into the church. Under him the parish thrived and prospered. He paid off a great portion of the parish’s debt that had hung over it since the days of Rev. Byrne. He tiled the spacious sanctuary, installed the marble altar rail, erected the Holy Agony altar, and encouraged the foundation of the Day Nursery (now the St. Vincent de Paul Center).

Succeeding Rev. McCabe in 1920 was Rev. Thomas Levan. Under him the parish would grow and expand. He partially restored the church, renovating the vestibule and sacristies. In conformity with his extraordinary talent as a great educator, he also added six classrooms to the overcrowded parish school. When Rev. Levan departed for St. Mary’s Seminary in Perryville, Missouri, in 1930, he left behind him a legacy of learning and a parish that was flourishing.

Since the pastorate of Rev. Levan, the parish has endured if not always thrived. Each succeeding pastor has contributed his specialtalents to the parish and has left his imprint on the parish’s spiritual and material life. Rev. Francis Corcoran guided the parish through the beginning of the dreaded days of the Great Depression. Rev. Michael Ries steered the parish through the latter days of the Great Depression, organizing parish bazaars and carnivals to keep the parish solvent and to keep it focused on the Vincentian mission of ministering to the poor. After a fire destroyed a large portion of the interior of the church in the mid-1950s, Rev. James Flannery replaced the beautiful but damaged Rose Window. He also added a modern convent and a new addition to the school.

Since then, the parish has undergone a vast number of changes. Both the grammar school and high school have closed. Beginning in the 1970s, the regentrification of the Lincoln Park neighborhood gradually brought more affluent parishioners into the parish. In the 1980s, the worship space was reconfigured to better reflect the thinking of Vatican II. And beginning in 1997, Rev. Don Ours initiated a major capital campaign to fund a major renovation of the church.

While the brief history just recounted is important, it nevertheless forms but one part of our parish’s marvelous story. The rest is written and continues to be written in the hearts of parishioners past and present. How has the Spirit graced your life through this parish? Were you educated here? Perhaps you received the sacraments of initiation here. Perhaps here you shared a moment of richness with the Lord or with a friend that shaped or changed your life. Maybe it was here that you met your spouse. It is these Spirit-graced experiences, together with those of parishioners past, that join us all to the rich history of St. Vincent de Paul Parish.

On December 25, 1875 Rev. Edward Smith, C.M. and 75 dedicated parishioners celebrated the first mass at Saint Vincent de Paul Parish in Chicago.  As the parish community grew, a church that could accommodate the rapidly growing population on the north side of Chicago was designed by architect James Egan.  The cornerstone was laid in May 1895 and the church was dedicated in May of 1897.  The church is considered to represent James Egan’s finest work.  The style is Romanesque, sometimes called French Romanesque for its lighter and more graceful arching style.  The rounded windows and doorways on the façade and the arches on the two bell towers are clearly Romanesque but the large window areas and the soaring qualities are reminiscent of French Gothic.

The church is built of cream-colored Bedford stone [Indiana limestone].  A striking feature of the interior is that there are only four columns and that these are placed at angles where the transept crosses the body of the church so that they do not obstruct anyone’s view.  There are no hanging lights or chandeliers which only enhances the openness of the body of the church.

The German baroque windows were obtained from Franz Mayer & Company of Munich, Germany.  The full pipe organ was constructed by Lyon and Healy and remains in operation for masses each weekend.  The high altar was designed by Augustine O’Callaghan and was installed and consecrated in 1909.  It is constructed of Carrera marble and took six years for design and construction.